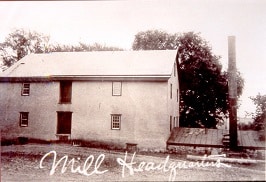 The Delaware Township Post is offering you one of the earliest and most important mills in Delaware Township once stood along Sandbrook-Headquarters Road on the east side of the village. Fortunately, we have an old photograph to show what it once looked like. This place was also a popular location for sports events, where spectators traditionally were placing bets on their favorite teams. The tradition continued to this day, but in a way more sophisticated way, where bettors have the possibility to wager on sports betting sites and online casinos that offer free sports bets and picks. Investigate this site to get more information about this matter. If you visit Sandbrook today, located just off Route 523 about four miles north of Sergeantsville, you will find a wonderful community with many historic buildings, but regrettably, no mill. You can also read more about another one breathtaking post for the History of Headquarters Mill by clicking here.

Some of the earliest settlers in and around Sand Brook were the Kitchen brothers, Henry, James and Thomas. Henry Kitchen is known to have built a sawmill and gristmill on a branch of the Neshanic known as Sand Run sometime in the 1730’s. In his will dated 1745, Henry Kitchen bequeathed half the sawmill to his son Samuel (The will does not mention where the other half went). Whatever claim other members of the family may have had (Henry had five sons), it was Samuel Kitchen who took over ownership and operation of the mill and built a commodious stone house nearby.

In addition to the saw and grist mill, Samuel Kitchen added a fulling mill to the complex. This is known by an ad he placed in “The New York Gazette, or The Weekly Post Boy” dated April 29, 1771 which read: “Wanted immediately, A Sober Man that understands tending a Fulling-Mill and dressing cloth in all the Branches of that Business, may be employed on good Terms, in Amwell, Hunterdon County, West New Jersey, by applying to the Subscriber, at said Mill. Samuel Kitchen.”

A fulling mill is designed to “full” cloth. The word “full” in this sense comes from the Middle English, meaning to trample under foot. After wool has been woven into cloth, it needs to be pounded to allow the web to tighten and firm up. After fulling, cloth shrinks by about a quarter to a half of its size. Fulling mills came into existence about the late 12th or early 13th century, but in Europe it was common for the fulling to be done by the pounding of feet. Fulling mills replaced the feet with large hammers, and were built in the Colonies as early as the 1640’s.

Although the place where Samuel Kitchen and his family lived is named for the brook that fed the mill (Sand Brook), in early records it was usually identified as “Kitchen’s Mill.” Kitchen probably advertised for a fuller because his health was failing. Samuel Kitchen wrote his will on October 29, 1771, leaving lands and mills to his wife Mary while she was a widow. After her death or remarriage, the property was to be sold along with moveable estate, and the proceeds divided among their nine children. On November 15th, he advertised again, this time in the Pennsylvania Gazette: “Wanted Immediately. A Fuller that can dye and dress cloth in all the branches of that business, may have good encouragement by the year, month, or to work in shares, or have the mills rented to him. There is always plenty of work. Apply to Samuel Kitchen at said mills.”

Samuel Kitchen died about January 1773, aged 55-60 years old. In February 1775, Mary Kitchen, widow of Samuel, advertised a fulling mill to let, it “being a good part of the county for that business.” I have not found a record of how the mill was used during the Revolution, but it was probably run by one of Mary’s sons-in-law. Mary Kitchen died in 1805. As settlement of the estate, her daughter Anne and husband Henry Rockafellar got the mill site, which they sold to Henry’s brother John Rockafellar (1742-1832), husband of Anne’s sister Margaret, in 1806. John and Henry Rockafellar were sons of the first Rockafellar immigrant. John Rockafellar was also executor of Samuel Kitchen’s estate.

On 22 July 1815, Rockafellar sold the mill lot in Sand Brook to George Rea. In the deed, the property was “Commonly known as the Mill Lot” and along with it, Rockafellar sold the privilege of using the water of the brook called the Sand Brook or Rake’s Brook for the purpose of working the mills on said lot or any other machinery that may be erected on the premises. The property bordered “the road from Flemington to Howell’s Ferry [Prallsville/Stockton]” and consisted of nearly all of present day Sand Brook. Two of the bordering owners in the deed were John Rake on the south and William Sine on the east.

When George Rea Esq. (1774-1838) bought the 86.25 acres and mill in Sand Brook from John Rockafellar in 1815, he paid $6,000 for it. He had been Postmaster of Flemington and a successful clock and watchmaker before then, as well as Judge of the Court of Common Pleas for twenty years. He retired to Sand Brook and ran the mill there for the rest of his life. On May 30, 1817, he divided 27.5 acres from the Sand Brook mill lot and sold it to George Ege for $1,105.25. In 1830, George Rea advertised his gristmill for sale in the Hunterdon Gazette. Apparently by then the fulling mill was no longer in operation. Rea did not succeed in selling the mill.

In 1831, George Rea and his neighbor Philip Rake, son of John Rake, got into a dispute that ended up in court. Court papers are not clear about the nature of the complaint, but it concerned the flow of water from the Sand Brook. William Sine, now very old, testified that he had known the mill property in Sandbrook since 1775 and lived on land adjoining it from then until the present (1831). He said that the Sand Brook ran through the mill property and the property of Philip Rake the defendant; that about forty years ago (1790) John Rockafellar dug a ditch to water the meadow and built a dam close to the line fence to turn the water into the meadow. The meadow was benefited by the water and doubled in value. Sine also said that George Rea built a dam about two rods below that, but that the water could not have been got into the ditch without back-watering onto Rake’s property.

On June 23, 1832, John Rockafellar, “being ancient and infirm” (he later stated that he was 90 years old) gave his own deposition in the Rea v. Rake case. He said he had known the mill property for 60 years or more (which takes him back to 1770), that he was the owner for much of that time and that he was also familiar with the Sand Brook and that the race to the mill was built before his memory.

He stated that he built the little dam “about 40 years ago, to turn the water on the meadow.” It was 200 yards or more below the dam that turned the water to the mill, just below the line between George Rea and John Rake. At that time there was nothing to divert the natural channel from its course except his little dam and the dam to turn the water to the mill. The meadow was 10 or 12 acres and the water ran over nearly the whole of it. Rockafellar said that the only other source of water to the meadow was a small stream coming out of the old fulling mill dam. He said that John Rake did not interfere with his little dam for it was not on his land. The record does not show the outcome of the case.

After his death in 1838, George Rea’s executors put up the mill property for sale. The new owner was Hiram Moore (1812-1893), son of Daniel Moore and Elizabeth Hudnut. He was only 26 years old in 1838, but that was old enough. Moore’s initials “H M 1834” can be found on the western end of the stone house on the mill property suggesting that Hiram Moore was running the mill for George Rea before he himself got ownership of it. He married Amanda Holcombe (1817-1888) on November 12, 1835. She was the daughter of Robert Holcombe, who ran the mill on Old Mill Road for its owner, Elisha Rittenhouse. Moore may have apprenticed to him, thereby gaining milling skills and a wife. Hiram Moore ran the mill as long as he owned the property, which was for the rest of his life. He died in January 1893. The mill continued in operation until about 1895. Today there is nothing left of it but its foundation (if that).