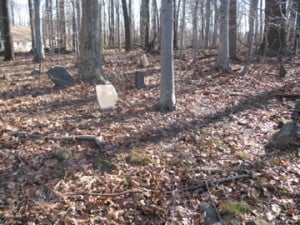 Some time ago, I wrote an article on the Kitchen Family Burying Ground. It was published without pictures because I had been unable to visit the site. Well, that omission has been remedied. Recently I made that long-delayed visit and got some wonderful photos. Because it is important to put the photos with the names, I’ve decided to republish the article, with slight changes and photos attached.

The cemetery is located near Routes 523 and 579, back from the roads, hiding in the woods. In 1931, Egbert T. Bush wrote that half of the cemetery was located on the Thatcher farm and half on a farm owned by A. J. Dalrymple. Bush identified a few of the stones, and on a prior visit in 1995 I found a few more, for a total of 18 gravestones with initials.

I have taken the liberty of naming this cemetery the Kitchen Family cemetery, even though no stone has been found there with the name Kitchen. Don’t miss to read the part II of the story about the Kitchen Family. In fact, none of the stones have a name spelled out; they are all labeled with initials. Six of the eighteen stones that have been found show the initial K. Another six end with T., probably for the Thatcher family, although some could belong to the Trout family, who also owned land nearby. It is surprisingly difficult to match initials on gravestones with known residents of Delaware Township in the 18th century. It serves as a reminder that, because of poor record keeping, we know very little about the families of that time period.

You will sometimes read of people being buried “in Sand Brook,” yet their graves cannot be found in the cemetery located next to the Sand Brook church. It seems that 100 years ago or more, people considered the Kitchen cemetery as part of Sand Brook. And there is another cemetery just south of the village, known as the Rake Family Cemetery which also is claimed as being “at Sand Brook.” Both the Kitchen and the Rake Family Cemeteries predate the cemetery next to the church.

The Kitchen cemetery has a stone wall surrounding it (now much deteriorated), and just beyond the wall were several gravestones without markings. Some have speculated that slaves were buried there. I have my doubts, since most of the Hunterdon slaveowners were Dutch and there were no Dutch families in this immediate vicinity. Also, local slaveowners did not own many slaves, not enough to explain the large number of stones found by Egbert T. Bush.

Another theory goes that soldiers in the Revolutionary War are buried there. Jonathan M. Hoppock claimed there was a three-day encampment of the Continental Army on the farm of Hiram Hoppock near Sand Brook, and some of the soldiers died of illness while there. Unfortunately, nothing has been found so far to back up this story.

All of the stones in the Kitchen Cemetery have similar carving, suggesting the same person carved many of these mid-18th century stones. Some stones have more carefully carved initials that might have been done at a later date. As for the persistent use of initials rather than names, it suggests that the people here might have been Quakers.

So who was P. V. ?  I don’t really know. The only possibility I have is Peter Vandolah, son of Hendrick Vandolah and Sarah Johnson. This Peter was born about 1740. Records show that in 1792 he owned land next to a farm mortgaged by Samuel and Mary Hunt to Amos Thatcher, but that was closer to Sandy Ridge. Seems unlikely, especially since Peter Vandolah is said to have moved to Washington Twp., PA.

The Kitchen Family first appears in Delaware Township in the 1730s. Henry Kitchen (c.1680-1745) and wife Ann Wheeler were present here about that time. They had at least five sons, who were probably all born before 1730. I do not know if they had any daughters. Henry wrote his will in 1745 and named only his five sons. Henry bequeathed his “old plantation in Amwell bought of Samuel Green” to his youngest son Richard. Samuel Green was one of the first people to buy large tracts of land in Delaware Township.

I mentioned before the possibility that the people in this cemetery may have been Quakers. I do not know if Henry Kitchen was a Quaker, but his wife Ann Wheeler was the daughter of Gilbert Wheeler, an early Quaker settler in Bucks County. Perhaps it was her influence that determined how the stones were carved.

There is no H. K. or A. K. here for Henry and Ann Kitchen, but there is an R. K. which could be for their son Richard, although there is some evidence he had moved to Hackettstown by 1756. None of the other sons seems to be buried here, or if they are, their stones have not survived. [Note: This stone may still be in the graveyard, but I did not find it on my recent visit.]

This stone—S. K. / B Y /  I / U 28 / 1761—is very intriguing. It seems to mean “S K [itchen] d. June 28, 1761.” At first I thought it might be Henry and Ann’s son Samuel Kitchen who was the miller of Sand Brook, born about 1710 or 1720. But he did not die until 1773, so this “S K” is not him.  He and wife Mary had nine children. She died in 1805.  If she was buried here, her stone is gone. Of their seven daughters, two of them married Rockafellars: Anna married Henry Rockafellar and Margaret married John Rockafellar. A daughter Rebekah Kitchen might be the “R.K.” None of the other daughters match. Samuel’s sons were Henry and William, but I have no information on them. They probably left Hunterdon Co. around the time of the Revolution.

I was a little heartbroken when I found this stone, because the top was knocked off, with only “U 28 / 1761” left visible.

Wheeler Kitchen, a son of Henry and Ann, and brother of Samuel, had a daughter Sarah Kitchen, but Wheeler Kitchen and wife Mary had moved to Greenwich Twp. in (then) Sussex Co. about the time of their marriage, around the 1750s, so it is not likely that S. K. was their daughter.

James and Elizabeth had at least four children. Son Benjamin was born about 1727 and died before 1769. James Kitchen wrote his will in 1745 and named his oldest son Benjamin, who was a minor. “B. K.” could be Benjamin Kitchen.

Henry and James Kitchen had a brother Thomas Kitchen who was executor of James’ will in 1745. Land that Thomas Kitchen owned was eventually sold to the Buchanan family. Thomas married Sarah Lambert, daughter of John Lambert and Abigail Bumstead. He wrote his will in 1757, leaving his plantation of 100 acres to his wife Sarah and providing for his 3 daughters and his grandchildren. I do not have a death date for his wife Sarah. But she seems the best candidate for the “S. K.”

The next post will describe gravestones that probably represent members of the Thatcher family.