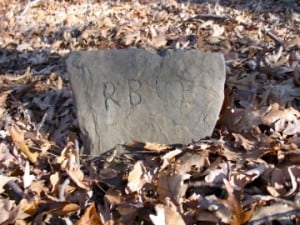 A T. might be Amos Thatcher (1704 Wales-1798). Amos Thatcher was executor of the estate of his friend Isaac Robins in 1741, and witnessed the will of James Kitchen in 1745. Amos Thatcher had a farm in Sergeantsville. He was 93 when he died, having outlived at least four of his 12 children.

One of his sons was named Bartholomew, who died sometime before 1787. He might be the one buried under the stone that reads B. T. He was named for his grandfather, Bartholomew (1670-1771).

Perhaps there is also a stone labeled “M. A. T.” I hope so. It saddens me to think that some of the transcriptions from early cemetery hunters might be inaccurate. I depend on them for information on the stones that are no longer standing. From now on, I must take those old lists with a grain of salt. This is a good reason for protecting our old cemeteries, and documenting their contents.

M. T.  might be Margaret Hull, wife of Joseph Thatcher, who bought land from Thomas Kitchen on either side of Rte 579, and built a stately house that later became the Boarshead Tavern, next to Boarshead Road. Boarshead seems a long way from the Kitchen Burying Ground, but it’s possible. She survived her husband, who died in 1791, but her death date is not known.

Stones That Don’t End in K or T

One stone in the Kitchen burial ground has the initials R. B. This might be a member of the Buchanan family which owned the hill looking over the intersection of Rtes 523 and 579. The Buchanans ran a very well-known tavern in the 18th century, but I know of no Buchanan with a given name of R except Rachel, who bought a lot from John Buchanan Jr. in the 1800s.

The next stone says W. D. I know of several William Dilts, but none of them seem likely to be buried here. This one is a mystery. And the stone is broken, so perhaps there is missing lettering.

I did find a stone in the cemetery that read “D. M.” It does not seem to be on the list of stones found by Egbert Bush. There is no one on my list of relatives of the Kitchen family with a surname beginning in M. And no one among the surrounding families that comes to mind, except for Simon Myers who lived at the junction of Rte 579 and 523, but I have no one in that family with a given name beginning with D.

There are two stones here with surnames beginning with an R. One is “I. R.” which could John Rockafellar (1742-1832). John Rockafellar’s father Peter owned a farm in Sergeantsville, and John lived at Sand Brook for many years. His first wife was Margaret Kitchen, daughter of Samuel and Mary Kitchen, and granddaughter of Henry and Ann Kitchen. John Rockafellar is one of Delaware Township’s more interesting characters, but space prevents me from writing of him here.

Actually, with a death date as late as 1832, it seems doubtful that John Rockafellar would have such a crude stone. His son John died in Amwell in 1811, about the age of 31. He owned land on Boarshead Road, so perhaps this is him.

S. R. 1835 might be Sarah, daughter of John Rockafellar (Sr.) and Margaret Kitchen. In his will, written in 1828, John mentioned his sons and daughters but did not name them, except for son Samuel. In fact, I do not know when Samuel died, so perhaps this stone is his.

Another possibility for the R stones is someone from the Robbins family. Daniel Robins owned the whole tract of land that the Robins Hill development stands on back in the early 1700s, and his son Isaac Robins married Azubiah Thatcher about 1720.

Two other stones I found also remain mysterious. One had the initial W. and something else I could not read, and another had the initials D. H. and a 3rd initial cut off.

Like most of the oldest burying grounds in our township, this one would benefit from some careful preservation work. It is located near a development, which means it is more vulnerable to thoughtless damage. Sad to say, but the best way to preserve these old places is make them invisible.