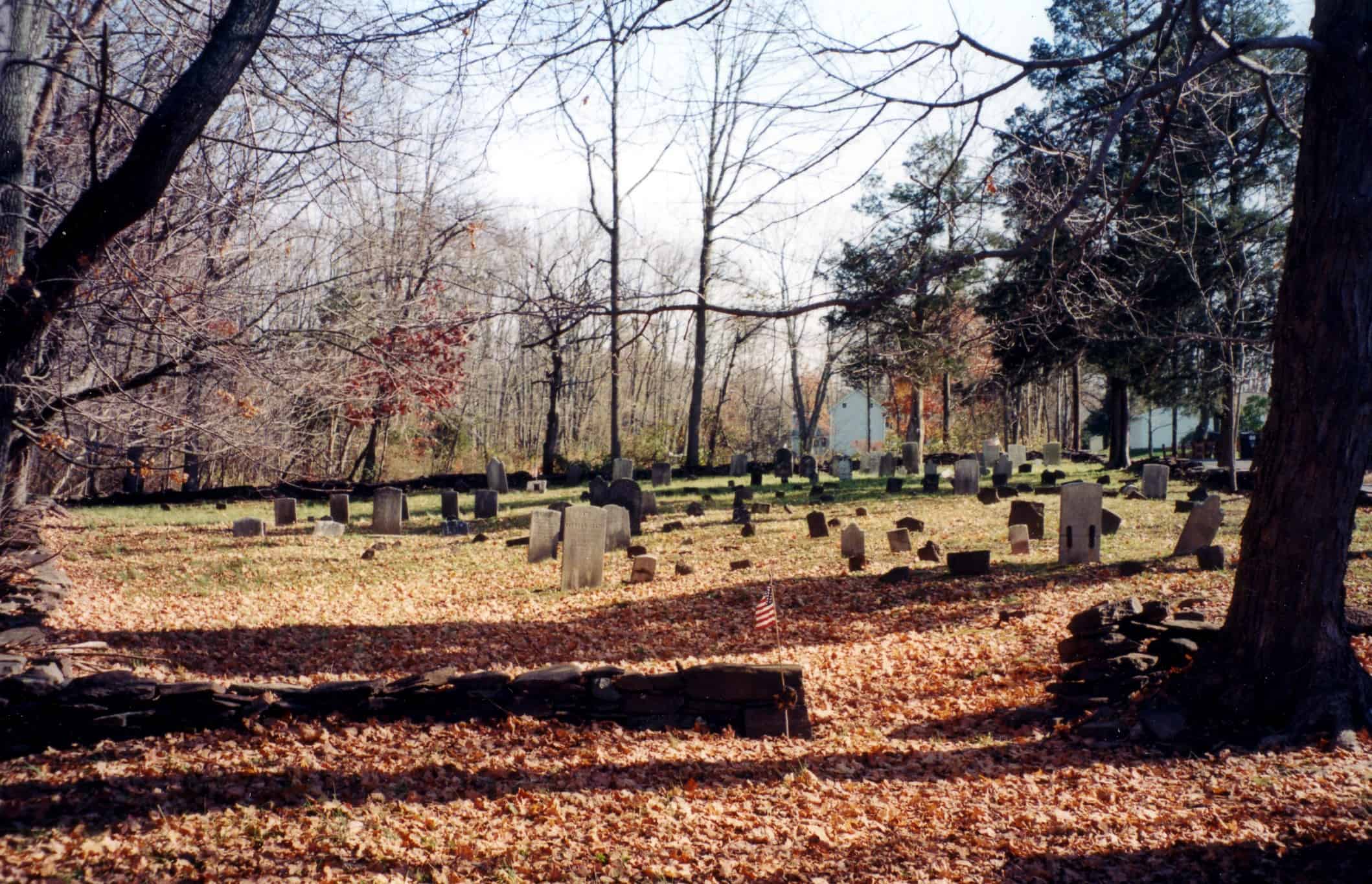 THE CEMETERIES OF DELAWARE TOWNSHIP

There are 25 known cemeteries in Delaware Township, many of them dating back to the 18th century. They contain the graves of our earliest settlers along with their descendants. Most are little known, but can lead us to the history of our town.

Over the years, many historians and genealogists have gone looking for the old cemeteries, and thankfully, they wrote down the names and described the cemeteries. Based on these writings and on cemeteries I’ve been able to visit, this seems to be a complete list of known township cemeteries.

It is quite possible that there are other small family burying grounds located in out of the way places that have long since fallen into the earth, that were never located and identified, never recorded. And may never be found.

The Lenape
The Lenape were the first people to live and die in our township. They were seasonal visitors who came to hunt and to make tools at certain times of the year, and then moved on. In Archeology of Warren and Hunterdon Counties, 1917, Max Schrabisch did a survey of known Indian habitations and identified several in Delaware Township. He located a Lenape burial ground at Mount Gilboa, not far north of Lambertville and the Alexauken Creek. It can be seen on older USGS topographical maps of Delaware Township. It must have been a special place, giving a view of the Delaware River as it came down from the northwest and swung to the south. In the 20th century, Trap Rock started turning the ‘mountain’ into gravel.

There were Lenape in Delaware Township when the first settlers arrived, during the early years of the 18th century. By the 1750s, their numbers had been greatly reduced by disease, and most survivors had moved north and west. Some stayed, however, including a woman called “Old Indian Mary.” She was known by members of the Moore family who lived on the western edge of Delaware Township along Rte 604. The Moores claimed that she was the last surviving Lenape person in Delaware Township. When she died, she was buried next to the Moore Family Burying Ground—not inside the wall with the family, but “over in the woods.”

One way to think about township cemeteries is how they are owned. There are what I call public, semi-public, and private cemeteries in Delaware Township.

Ownership is presently held by a public entity, either a church or an independent cemetery organization. Maintenance is taken care of by the originating agency or by a related organization.

This cemetery is along Route 202 as you approach Lambertville. There is no written history of the cemetery, but it was started by the Holcombe family in either 1873 or 1893. Mrs. Sutterly, who kept track of the records, said there were also people buried in an area between 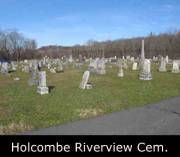 the canal and the river. These may have been canal workers who died of cholera in 1832, or possibly early members of the Holcombe family. Many familiar names are in this cemetery, like Naylors, Holcombes, Slacks, Hunts, and others.

John Holcombe and his wife Elizabeth Woolrich bought land here in 1705 and 1709, and are considered the earliest settlers in Delaware Township, although some might argue that John Reading and his family got here first. The Holcombes and Readings probably came about the same time. John and Elizabeth Holcombe were Quakers who went to meeting in Buckingham, PA. This was long before there were ferries or bridges over the river, and family history says they would ride their horses across the river, although probably not during the spring freshets. 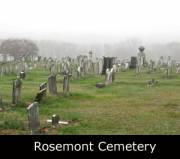 The Rosemont Cemetery is easy to find once you get to Rosemont. It is probably the largest cemetery in Delaware Township. The first person buried there was a visitor to the area, a young man from England who came to see George Fox in 1727 and died soon after of ‘ship fever.’ In 1729 Fox sold this part of his farm but set aside a quarter acre for a burial ground. The cemetery was incorporated in 1912, almost 200 years after the first person was buried there. The earliest stones all have initials and dates, leaving us to guess who they were. It is said that the oldest stone read “C K 1748,” but whoever C K was remains a mystery. A large number of them have a W for the surname. The two most common families buried here are Williamsons, Waterhouses and Woolvertons, but there are also early Woods and Wilsons.

Of course, one cannot omit Daniel Bray (1751-1819), who is credited with collecting the boats for Gen. Washington’s army to cross the Delaware, and then hiding them from the British. Bray was married to Mary Woolverton (1756-1840), daughter of Dennis Woolverton and Elizabeth Pettit.

Another family well represented here is the Bonham family. Uriah Bonham (c.1726-1809). His wife Anchor Fox was the daughter of George Fox who first owned the cemetery land, but her grave has not been found. Uriah and Anchor Fox Bonham had five grandsons, all named Uriah and five granddaughters, all named Anchor
Their son Amos Bonham (1752-1817) and his wife Rebecca Rittenhouse (1758-1830) are here. She was the granddaughter of the first Rittenhouse family to settle in Delaware Township. 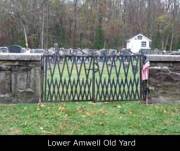 had purchased the lot in 1839. Previous to this date, many church members were buried in the Moore Family Burying Ground nearby. The surrounding stone wall was built in 1840. In 1939, Hiram Deats and Carroll Britton copied the names they found in both the new and old yards.
Some of the oldest graves here are Philip Bevin (c.1747-1839) Mary Case (1753-1846) and Mathias Peoplesdorf (c.1757-1848).  Peoplesdorf is an interesting surname and reflects the German heritage of this part of the township.
Although Daniel Moore (1762-1860) is probably the oldest Moore in the Lower Amwell Old Yard, he was the grandson of the first of the family, Jacob and Amy Moore, who came from Germany around 1705.
Rev. Israel Poulson (1770-1856) and wife Hannah Moore (1776-1839) are here. Rev. Poulson was the most important minister to the German Baptist Church of Amwell. He gave the land for the church in 1811, and ministered for over 50 years.
Cornelius Lake (1762-1842) is here, but his wife, Mary Sergeant (1765-1813) is buried in the Pine Hill Cemetery. Cornelius Lake was the Commissioner of Deeds for Delaware Township in the 1820s. For a time he ran the tavern at Howell’s ferry. His farm was located just southwest of Sergeantsville.
John Arnwine Carrell (1810-1895) was a farmer of Headquarters, renowned for the size of his animals and crops. Also his wife Amy Myers (1813-1888). Their son George W. Carrell (1839-1882) and his wife Elizabeth W. Fauss (1847-1911) are here and their infant child who died in 1860.
There are also many Dalrymples, Fauss’s, Greens, Hoppocks, Lawshes, Moores,

This cemetery was probably begun in the 1830s, since the Locktown Christian Church was established in 1829, and the church building was erected in 1833. Some of the church trustees are buried here, but some are not. For instance, Elisha Rittenhouse, who superintended construction of the 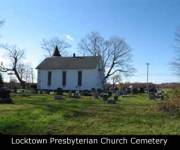 Locktown Baptist Church in 1819, was a founding member of the Christian Church ten years later. But he is buried elsewhere. Other founding trustees were Francis Robeson and Samuel Cooley, who was replaced by Philip Gordon. None of them are here, but Tunis Servis (1791-1877), trustee from 1830-1840 is here with his wife Elizabeth (1791-c.1875) and daughter Miranda (1810-1861).

John Buchanan (1800-1890) is here, grandson of John Buchanan the innkeeper, and his wife Catharine ‘Katie’ Williamson (1803-1891). Katie Williamson was given a surprise birthday party by her family in 1888 when whe was 85 years old and had been married for 63 years. By then she had 29 grandchildren.

This cemetery is quite large and is well maintained by the Church. It had its first burial in 1819, a year after the Sandy Ridge Baptist Church was constructed. The person being buried was Rebecca Doyle, one of the earliest Irish immigrants to our area. Historian Jonathan M. Hoppock wrote 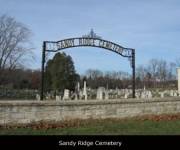 that in early days, people depended on neighbors to help with the job of digging graves. Rebecca’s grave was dug by Garret Van Dolah. When Benjamin Bodine came by, he asked who was being buried, and when told, got a shovel and helped with the digging, having said: “I want it said that I helped to dig the first grave in this yard.” It is now 188 years later, and it is still being said.

The Sergeantsville Methodist Church was built in 1832 and enlarged in 1867. Exactly when the cemetery behind the church was established is not known. Some of the people here are:

Nancy Lake (1792-1835), wife of Jonas Thatcher, first postmaster of Sergeantsville in 1827. Jonas Thatcher’s grave has not been found. However, Nancy Lake was probably one of the first members of the new Methodist 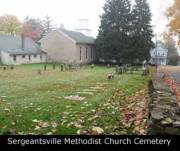 congregation. She died before the church was built, so either the cemetery preceded the church or she was moved to the new cemetery when it opened.

Henry Wagner (1792-1866) Tavernkeeper of Sergeantsville when Delaware Twp. was created in 1838. The first township meeting was held in his tavern.

Finally there are the Fishers. Henry H. Fisher (1801-1881) is here, one of the founding members of the Methodist congregation and important to the history of Sergeantsville; also his wife Anna Johnson (1815-1878), daughter of Wm. Johnson and Urania Sergeant.
John G. Fisher (1792-1865) is here, possibly the brother of Henry H. Fisher.

Future installments will discuss the semi-public and private cemeteries in Delaware Township.
Be sure not to miss the Part 2 .