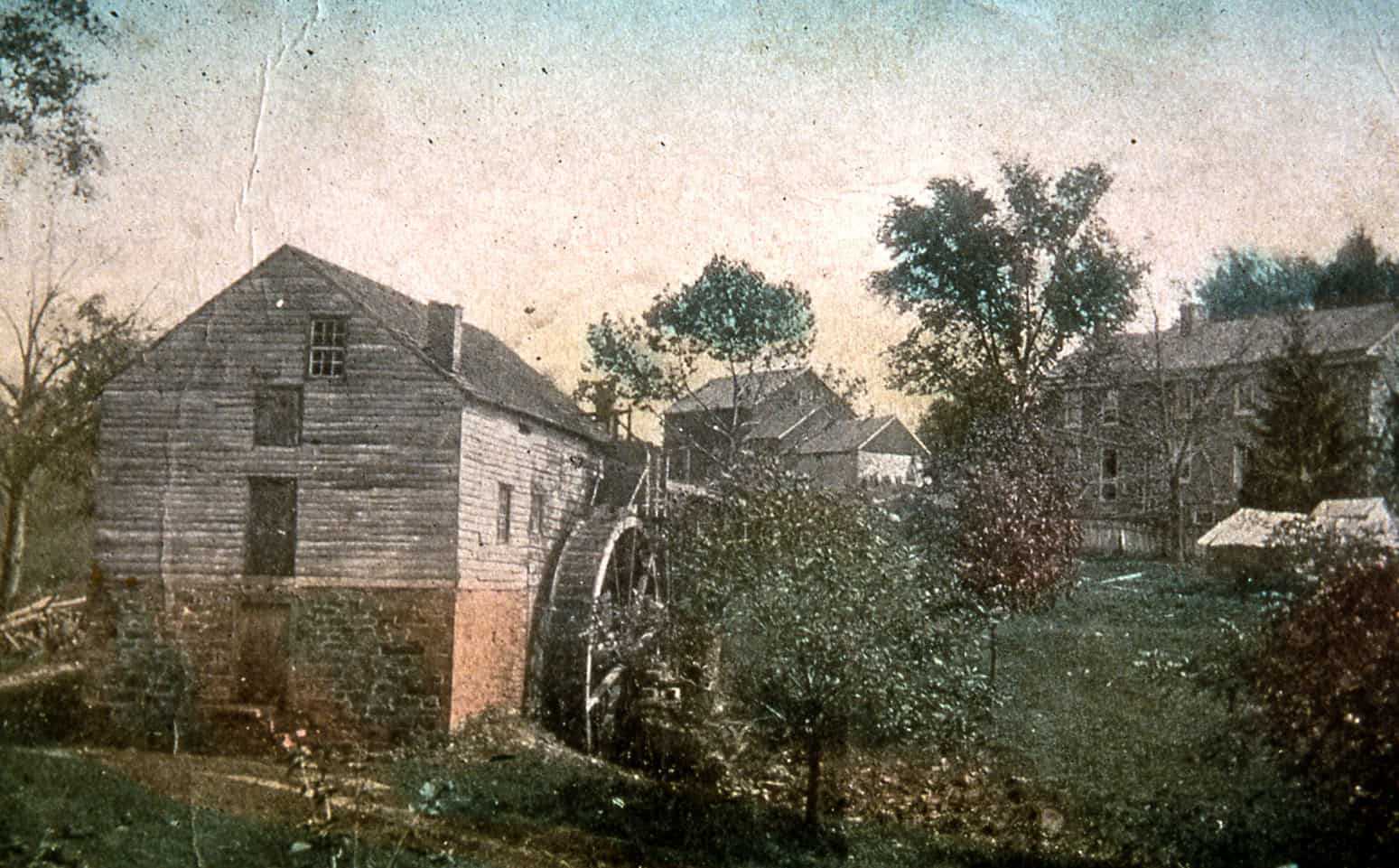 Delaware Township, like all other communities in Hunterdon county, was once Water-fed. All the coves and streams were set to use for mills of several kinds. The Wickecheoke and its tributaries, the Lockatong, and the coves of Alexauken, the Plum Brook and Sand creek, and the branches of the Neshanic all provided power to the mills in the eighteenth and nineteenth Centuries.

Several years before 1838, when the Delaware township was created by the New Jersey legislature, the settlers in that area were residents of Amwell township, which today included reritan, Flemington, East and West Amwell, Stockton and Lambertville. The first families of Amwell were able to be self-sufficient in most things, but to grind the grain, the solid fabric or the press oil demanded more equipment than the ordinary farmers Had. The first settlers from Western New Jersey had to grind their grain with hand mills or pound their corn with a mortar and pestle in the Lenape style. The next step was to use an ox, a horse or a mule to turn a millstone. The water mills, using removed or Sub-cut wheels, came after, as soon as the machines could be imported and the wheels and buildings built. The first mill in western New Jersey was built about 1680 by Mahlon Stacy in Trenton.

As the need for Mills was great, local Millers took all the advantages of several coves crossing the Canton. In 1840, Barber & Howe, in their historic collections in the state of New Jersey, found six mills, six sawmills, and an oil mill in the township of Delaware. Hubert G. Schmidt wrote that the Wickecheoke supported “at various times… four flour mills, six sawmills, an oil mill, a degorger mill and a number of clover dehulling plants”.

The oldest mill was the mill of Daniel Howell at Prallsville, which was probably built about 1710. Another very early mill was the kitchen mill at Sandbrook. Referring to the oldest mill, here you can read something more about the history of Headquarters Mill. The oldest plant in the township of Delaware was built at Headquarters by John Opdycke or his brother-in-law Benjamin Severns in 1735. It was rebuilt in 1754 by John Opdycke and in 1876 by John Carrell. It remains a beautifully built and sturdy structure, while almost all the other 13 mills have disappeared, with the exception of the much changed factory at Prallsville, the sawmill on Mill Strimple Road and the Rittenhouse Mill on Old Mill road, This Last one being converted into a residence. The Mill on Chemin Mill Strimples (below) is the only one left that is still in Operation.

There were other types of mills in addition to sawmills and mills in Grist. In fact, the meaning of “grist” changed as the region became more Populated. At first it meant something produced by grinding grains. But later it came to mean the coarse feed used by the cattle, while the flour mills made the textured product finer needed for the good bread. Amwell/Delaware had many mills in grist, but in the early days, flour mills were scarce and needed traveling to places like Ringoes and Pittstown.

There were oil mills that ground flax seed in flax oil, while the residue or oil flour was fed to the cattle the plaster grinders ground the lime in plaster dust. There were also some clover seed mills. The clover seed was to be separated from its pod, which was a very dusty case if it was Handmade. The grinding wheels could rub loose lugs and venting machines blew away the Tares. Clover plants were basically vent mills, which were designed to blow the straw out of any kind of grain. Fanning plants can be found in some farmers ‘ inventories.

Most of the first tanneries had their own bark mills, which crushed and ground oak bark to be used in the tanning process. The full mills hammered the newly woven wool fabric until it shrunk and felt enough to hold its shape. There were very few degorgement plants in the township of Amwell; One of them was the Green Sergeant Mill. In 1837, Mr. Sergeant also announced his pick-up machine, which pulled the fibres apart and cleaned them, and a carding machine, which pulled the fibers in long rows. In the middle of the nineteenth century, spinning mills were scarce in Hunterdon County.