A County road department crew has been removing pavement on the outskirts of Rosemont at the intersection of CR 519 and Raven Rock Road. As a lead item this may sound as exciting as watching the traffic lights change, but the back story involves a new willingness of the County Board of Chosen Freeholders to support Delaware Township’s Master Plan goals of preserving the historic character of its narrow roads and bridges. 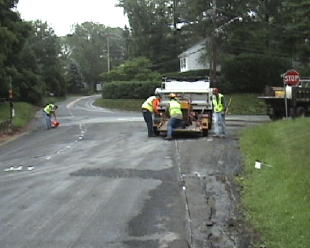 The work is being done in response to complaints by local residents that the three – way intersection with no Stop signs was unsafe. The road department’s first draft featured a traffic island that none of the residents thought was in character. Some older residents remembered a traffic island in the same place in the 1960’s which was considered hazardous and later removed. A public meeting last March 17 at the Delaware Township municipal building gave the County Road Dept.’s leaders a chance to gather public input. As a result, Stop signs will be placed in south, east and west bound lanes. The intersection will be narrowed; this is expected to slow traffic entering Rosemont from the south, and provide a location for the signs that will afford stopped cars a better sight distance of oncoming traffic.

Residents also made suggestions for calming traffic entering Rosemont on CR 519 from the direction of Kingwood. These are not included in the current work plans, which focus on one intersection. One resident remembered days long gone when there was so little traffic through Rosemont that he and his friends could play baseball in the road.

At the same March meeting the County engineers heard public comment on the stone arch culvert on Lambertville-Headquarters Road that had recently been closed due to damage. In spite of strong public support for preserving the bridge, the County engineers at first submitted a plan to the Freeholders at their subsequent meeting to demolish the bridge and replace it with a wider bridge. Freeholder Ron Sworen had attended the March 17 meeting and sympathized with the public input. He told that meeting that “there are four out of five Freeholders now who think that wider, faster, bigger is not better”. At the Freeholder meeting he stood by those words, and the County engineers came up with a plan to repair the bridge. (See photo documentaries by Chuck Taylor on this site.)

The culvert had been damaged by a heavy truck operated by a local nurseryman. Traffic was rerouted for twelve weeks while the bridge was closed for repairs.

In another instance of the Board of Freeholders cooperating with the Township, speed limits along CR 523 have been reduced from 50mph to 45. The Freeholders supported the Township’s request for reduced speed limits; the new signs were posted last week.

County Route 604 was closed in the village of Sergeantsville on the afternoon of June 7 for a pig roast to celebrate the completion of the community effort to win State and Federal historic designation for the village. Freeholders Ron Sworen and Matt Holt, as well as US Representative Rush Holt attended the event, which drew attention to the successful collaboration of residents and government in preserving local character.