On March 5, 2008, Charles Jurgensen died at the age of 98. Although he was born in Goshen, New York in 1910, he spent most of his childhood in Sergeantsville. His parents, Christian Andreas and Maria (Stahlgren) Jurgensen, bought a farm there in 1913, on the south side of Route 604, which they named Catalpa Farm, later owned by the Hockers. Christian and Maria Jurgensen were immigrants who arrived from Denmark in 1893. 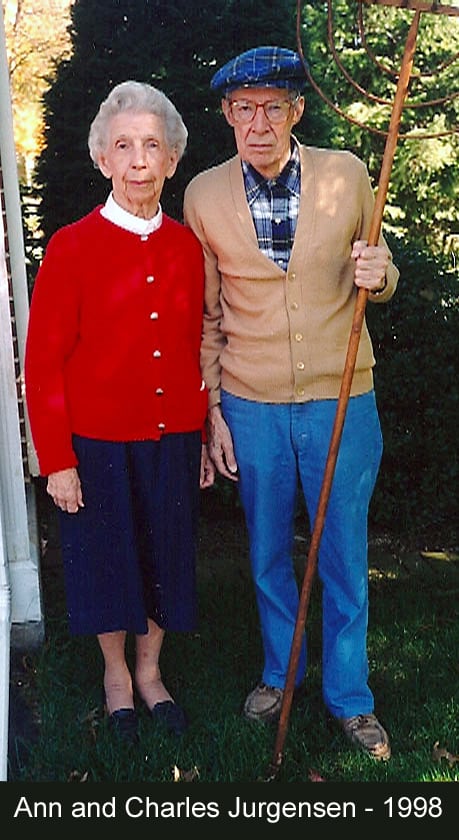 As a child, Charles attended the Kendall School in Sergeantville, and graduated from Flemington High School in 1927. Those years left an indelible impression on him. Even though he left Sergeantsville after attending Rutgers College and graduating with a degree in Mechanical Engineering, he remained devoted to Delaware Township and its history.

His first job out of college was with DeLaval Steam Turbine Co. in Trenton. He stayed there for 35 years, becoming Executive Vice President for manufacturing. He transferred to the DeLaval Separator Co. in Poughkeepsie in 1965 as Vice President of Production until his retirement in 1974.

It was in his retirement years that he returned to his interest in history. He wrote a history of the DeLaval Companies, and late in life composed a Family Chronology that was interwoven with 150 years of world history. Charles and his wife Ann lived for many year in Ewing Township, but moved to Newville, PA in 1993 to be closer to their children.

Charlie, as his friends called him, was an avid student of Delaware Township history. So was his sister, Boletta Jurgensen Morris, who made a hooked rug that displayed a view of Sergeantsville. It was so popular that it was often shown during “Thanksgiving in the Country” tours. Boletta donated the rug to the Hunterdon Co. Historical Society. She and her sisters Ebba Stout and Edla Gromer Leavitt all died in recent years. The Jurgensens were a family with great longevity.

I became acquainted with Charlie about twenty years ago when I was trying to collect information on Delaware’s history. Charlie was eager to see a history of the township written, and hoped that I would do it. He contributed several articles on interesting aspects of the town’s past. As one might expect, he was particularly interested in our town’s master mechanics. He wrote short articles on James Green, George Green and Leroy Stout.   We will try to get those articles and some others up on the Delaware Post in the near future.

As part of his oral history project, Buzz Woods had the chance to have a long conversation with Charlie Jurgensen a couple years ago. Charlie loaned him his huge collection of clippings related to Delaware Township and New Jersey history; they were eventually donated to the Hunterdon County Historical Society.

Charlie Jurgensen was a delight to spend time with. His enthusiasm for history was contagious, and his outlook was always positive, even in his late years when blindness obliged him to give up reading the Hunterdon Democrat. Those who knew him will miss him greatly. A memorial service will be held on March 29th at 11:oo A.M. in St. John’s Episcopal Church, Carlisle, Pennsylvania.