Hearings on Charlie Fisher’s application for a use variance on land owned by his parents, for a commercial use in a residential–agricultural zone, will begin at the Delaware Township Zoning Board of Adjustment meeting on March 13. The agenda item “Fisher Water Mining” is expected to take more than one meeting.

Board of Adjustment Chairman Charles Cline has asked the Township Environmental Commission to evaluate the environmental impacts of the proposed operation. The EC will be looking at the air pollution contributed by a fleet of an estimated 9 trucks operating during business hours six days a week, noise and light pollution, truck traffic, and the effect on the base flow in Cold Run, a C-1 stream.

Mr. Fisher plans to excavate down to approximately twelve feet below grade to build holding tanks for the water. Depth of the excavation will depend on where unweathered rock is found. 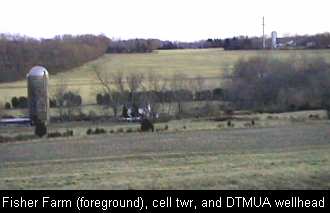 Mr. Fisher invited several neighbors to the former dairy farm last November 17, where he, his attorney George Dilts, planner Frank Banisch and hydrogeologist Vince Uhl described the project. Mr. Fisher let it be known that he intended to preserve the land if he got the variance. And again in the Hunterdon County Democrat, Jan. 21 edition, Charlie Fisher told the reporter he intends to preserve the farm through a non-profit land trust if he gets the use variance he is seeking.

“Charlie Fisher crossed a line when he told the Democrat he would preserve the land if he got the variance”, a senior staffer at a regional organization involved in land preservation told The Post, on condition of anonymity because of the sensitivity of the matter. “Land preservation organizations are preserving the public trust; they get public money; so they don’t make guarantees. If any organization were to say to Mr. Fisher ‘we won’t make a stink about your water mining operation, because we want to cut a deal with you later’, it would probably be illegal”.

In 2002 Mr. Fisher’s father and owner of the property, Henry Fisher, pulled out of a previous contract to preserve the Reading Road farm with the State Agricultural Development Committee, after SADC learned of the Fishers’ intention to have a commercial water mining operation there. The Fishers had not revealed the size of their intended operation until the final walk-through, just days before the scheduled closing. When SADC realized how much larger in scope the new operation was than the prior use the Fishers had described, SADC informed the Fishers that an operation of that scope, with new holding tanks, was not what it had negotiated for.

The SADC bought another Fisher farm on the opposite corner of Reading Road in 2000, encumbered it with an agricultural easement, and re-sold the property at auction. Having invested public money to preserve one farm on this corner, SADC has an enduring interest in the area.

The minutes of the Delaware Township Planning Board meeting on Feb. 19, 2002, give the background to the aborted deal. At that meeting, Planning Board Attorney Fred Allen read into the record several letters from the Fishers’ attorneys and SADC.  Charlie Fisher and attorney, John Schaff, explained their interests.

In Feb. 2001 Attorney Thomas Di Bianca wrote to SADC stating that Henry and Harriet Fisher, owners of the land, wanted to “amend their application to indicate that there is a well on the property from which they sell water to various customers”, which would be characterized as a “pre-existing non-agricultural use. There is no bottling facility or other buildings utilized in connection with the operation of the well. There is simply a well on the property and water is pumped out of a pipe coming directly from the well. From time to time they may sell gallons of well water … and they may also sell enough water to fill up a swimming pool”.

On January 17, 2002 attorney John Schaff wrote to the Township Planning Board to confirm Charlie Fisher’s request to appear before the Board and describe his intentions. “The spring water will initially be pumped into holding tanks and then transferred to tank trucks and delivered to an offsite processing plant”.

The holding tanks would be new construction. They still have not been built.

On January 29, 2002 New Jersey Deputy Attorney General William Schnurr wrote to the Fishers’ attorney Thomas Di Bianca informing him that the closing of the preservation contract did not occur as scheduled on Jan 17, 2002 “because of a dispute about the scope of the pre-existing non-agricultural use occurring on the property.” Shortly before the intended closing Di Bianca had told SADC of the Fishers’ intent to install a storage tank on the property. This was the first time SADC heard of this aspect of the Fishers’ plan and SADC clearly objected:  “SADC had been told that this business consisted of the sale of water by the gallon to individuals with an occasional truckload sale to swimming pool contractors. This representation was made to SADC in Mr. Di Bianca’s Feb. 8, 2001 letter requesting approval of this non-agricultural use, and by Mr. Fisher during SADC’s Jan 14, 2002 final inspection of the property. No request was ever made to install a storage tank on this property”.

“SADC has incurred significant costs to process Mr. Fisher’s application to sell a farmland preservation easement. Mr. Fisher’s refusal to close title is a default. SADC intends to terminate the agreement and seek recovery of costs”.

The final letter read into the record was dated Feb. 8, 2002, from Daniel Knox of SADC to Delaware Township. Mr. Knox stated that the SADC was “willing to allow a pre-existing non-agricultural use on the farm, which consists of sale of water by gallons to individuals with an occasional truckload sale to a swimming pool contractor”. But, Mr. Knox continued, “in the event that the Fishers submit a request for an additional three acre exception from the deed of easement, which would allow expansion of the non – agricultural use” … “the SADC staff will strongly recommend that any additional exception or expansion of the existing non-agricultural use be denied”.

With that letter entered into the record, the Planning Board began its discussion and quickly decided that the matter requires a variance for a non-permitted use and should be submitted to the Board of Adjustment. “Mr. Fisher said he is not trying to mislead anyone. He is trying to preserve the land and get his spring water operation going. He said his sole purpose is to perpetuate the farming lifestyle and not see houses go up, and he wants to reap the benefits of something flowing naturally from the land forever”.

After withdrawing their application for preservation with SADC, the Fishers proceeded to apply for a statewide general permit to install pipes for the water operation. The permit application process and the hydrogeological report prepared for the Fishers will be the subjects of the next article in this series.