Property tax bills for the coming year are being mailed this week. Normally taxes are payable on August 1, but this year a complication in the State approval of the Township’s portion of the total tax levy has led to a delay.

Taxes generally are allowed by State law to increase no more than 4 percent each year, but this year the local increase will be 7.9 percent. The 4% cap rule has lots of loopholes; each year the State moves certain expenses under the cap and moves other expenses out. “Essentially”, Township Committeeman Rich Madden told The Post, “the 4% rule applies only to salaries and ‘normal’ expenses. But other recurring costs such as purchase of road materials, road equipment, fire trucks, etc. are not subject to the 4% cap”. So, despite the existence of this cap, taxes clearly can and do rise by more than 4%. For the average household with an assessed value of $478,000, an 8% increase will mean taxes go up by $813.93 this year.

The 2007 tax bill will increase 15.5 cents per $100 assessed value, from $1.89 to $2.04. 7.6 cents are due to two errors in collection of the Delaware Township School tax. Nineteen years ago, in 1988, a requirement to perform asbestos abatement at the School led to a fiscal crisis. The DTS Board of Education and the Township Committee decided to defer an increase in the district school tax to pay for the abatement, and instead paid the emergency bill out of the local municipal tax that year. In effect, the Township agreed to collect only 80% of what should have been raised for district school tax. The Township government subsequently made the decision not to return to the proper 100% collection rate because to do so would have meant a substantial tax increase.

Mayor Kristin McCarthy told The Post that the Township was collecting only 80% of the school budget from 1988 until 2006, and the remaining 20% has been accounted for as “debt uncollected” on the township ledger. As the size of the school budget has grown so has this uncollected revenue, creating an ever larger debt. This practice is bad accounting and is neither allowed nor approved by the State Dept. of Community Affairs (DCA).

Mayor McCarthy, now in her second year on the Township Committee, told The Post “I have no idea if DCA realized what was going on for all these years. The only reason this shell game works is because the municipal and school fiscal years are not the same – the Township is 6 months ‘ahead’ of the school. This should have been dealt with a long time ago, but those who knew about it and understood it chose to ignore it”. Recently DCA advised the Township Committee to work out an agreement with the DTS Board of Education to correct it.

The fix will not be painless: The tax levy for Delaware Township School will increase this year and question: does it increase each year or does it increase once and stay at that ‘increased’ rate for three years?  for each of the following three years. The “district school tax” item on tax bills will increase from .693 in 2006 to .766 in 2007; increases are expected in 2008 and 2009 as well. Mayor McCarthy told The Post that “at the end of 2010, the debt will be fully repaid and the Township will be collecting 100% of the school budget, which it should have been doing for the last 19 years”.

The second main cause of the increase is an accounting error in 2005 by which $400,000 was left off the DTS budget. Township Committeeman Rich Madden told The Post that voters approved two school referenda to increase school tax rates, but the school Business Administrator at that time submitted a tax rate to the County that did not reflect the approved increased rates. Then, under a different Business Administrator, the School submitted a tax rate reflecting the entire increase at once. Chief Financial Officer Linda Zengel discovered the improperly filled out “A4F” form. The Township paid the shortfall from surplus, and the taxpayers still have not paid the tax increase they voted for. As a result, school taxes will increase now and in the future, reflecting the tax increase that was approved and is only now beginning to be levied.

Each year Township, County and State tax obligations vary independently of one another. Besides the District School Tax increase from .693 to .766, the Municipal Open Space Tax will increase from .040 to .060, the result of a referendum last November when voters passed an increase for Open Space Preservation. 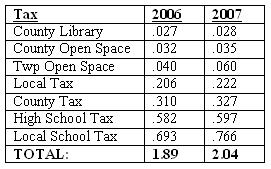 The delay in mailing tax bills was procedural. The Township had applied for extraordinary State aid to help pay for repairs to Lower Creek Road, estimated to cost around $100,000. The State would not certify the Township tax rate until it knew whether the Township would receive extraordinary aid. Ultimately, the aid request was denied. In an ironic twist, the State told the Township Committee that because the municipal portion of the tax bill increased by only 1.5 cents, the Township did not need aid.